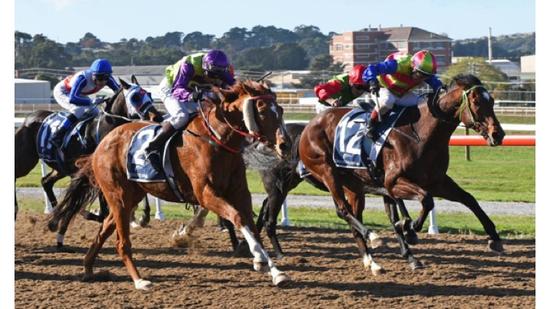 Longford trainer Alana Fulton has made a habit of winning races with mainland horses found on the Internet and she did it again at Spreyton on Sunday with a rank outsider.

Wineglass Bay, a $61 chance, was having only his second start for Fulton and his new owners when he held out favourite Gee Gee Caughtyato win the Class 1 Plate by a short half head.

Jockey Erhan Kacmazcould take a good share of the credit because he gave the four-year-old a lovely run, sitting midfield one-off the fence.

Despite Wineglass Bay's long odds, Fulton was expecting the gelding to improve on his Tasmanian debut.

"We ran him first-up over 1400m at Mowbray but it was probably too short for him and he didn't really get into it," she said.

As she often does, Fulton bought Wineglass Bay off an online auction site.

"I look at the horses that are available and think what I might be able to do with them," she said.

"He showed some ability (in Victoria) but just wasn't measuring up to the strong provincial form over there.

"I thought in a smaller stable with more one-on-one attention we might be able to turn him around and get a result.

"Now that he's shown he can handle the synthetic track we can push forward over the next three months."