Drop in rating points opens the door for Geepee 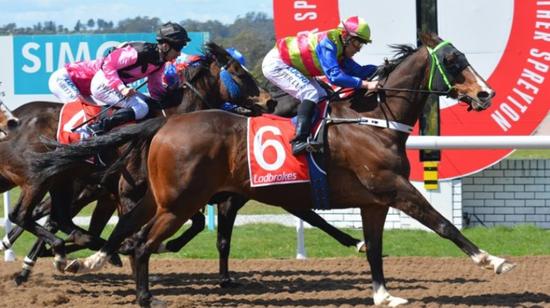 Flying Geepee rediscovered his best form to score a game win in a benchmark 58 handicap over 1650 metres on Sunday.

The Alana Fulton-trained gelding was at one stage of betting the $10 rank outsider in the field of five but when the gates flew open, he had been backed into $4.60 and third favourite behind Generalmaintenance ($3.10 fav) and the heavily-backed Fish Bones Fry that shortened from $6 to $3.70.

Fish Bones Fry (Scarlet So) led and held a six-length break nearing the home turn but he was collared in the home straight firstly by the favourite and then Sudden Shock ($8) joined in.

However, neither could resist the powerful finish of Flying Geepee that tried to lay in over the final 150 metres.

Mehmet Ulucinar, the rider of third-placed Sudden Shock, fired in a protest claiming interference in the home straight but stewards quickly rejected the objection.

Flying Geepee found a purple patch of form early last year but since his previous win in Devonport his rating had dropped so low, he was able to sneak into this latest assignment with a rating of 52.

“I thought that if he could find his best form he could win and that’s how it panned out,” Fulton said.

“He is a very difficult horse to train and ride in a race, but I thought Peter (Lui) handled him well and he coped with him running in over the last 100 metres.

“I was a bit nervous when the protest was lodged but that was quickly dismissed.”